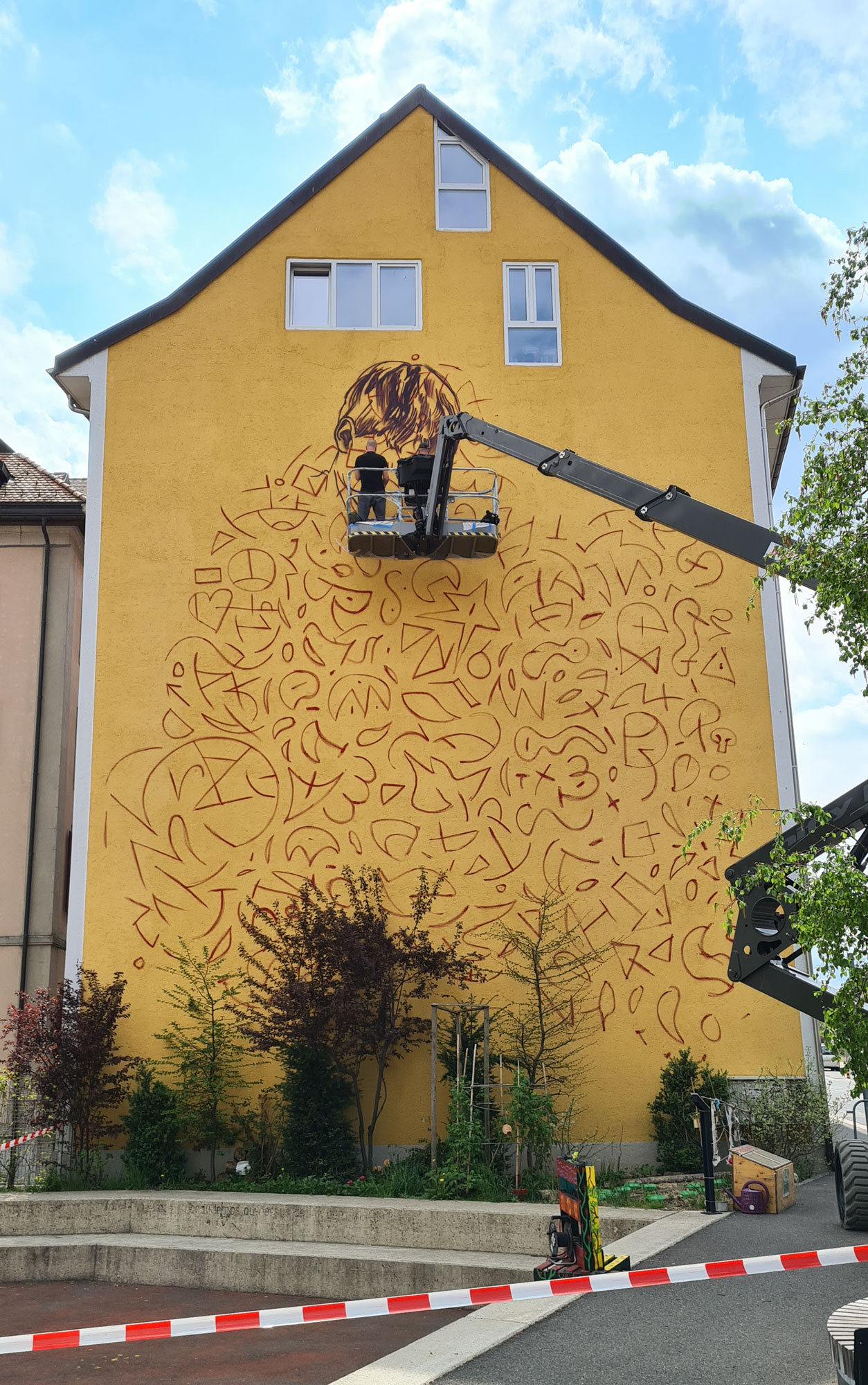 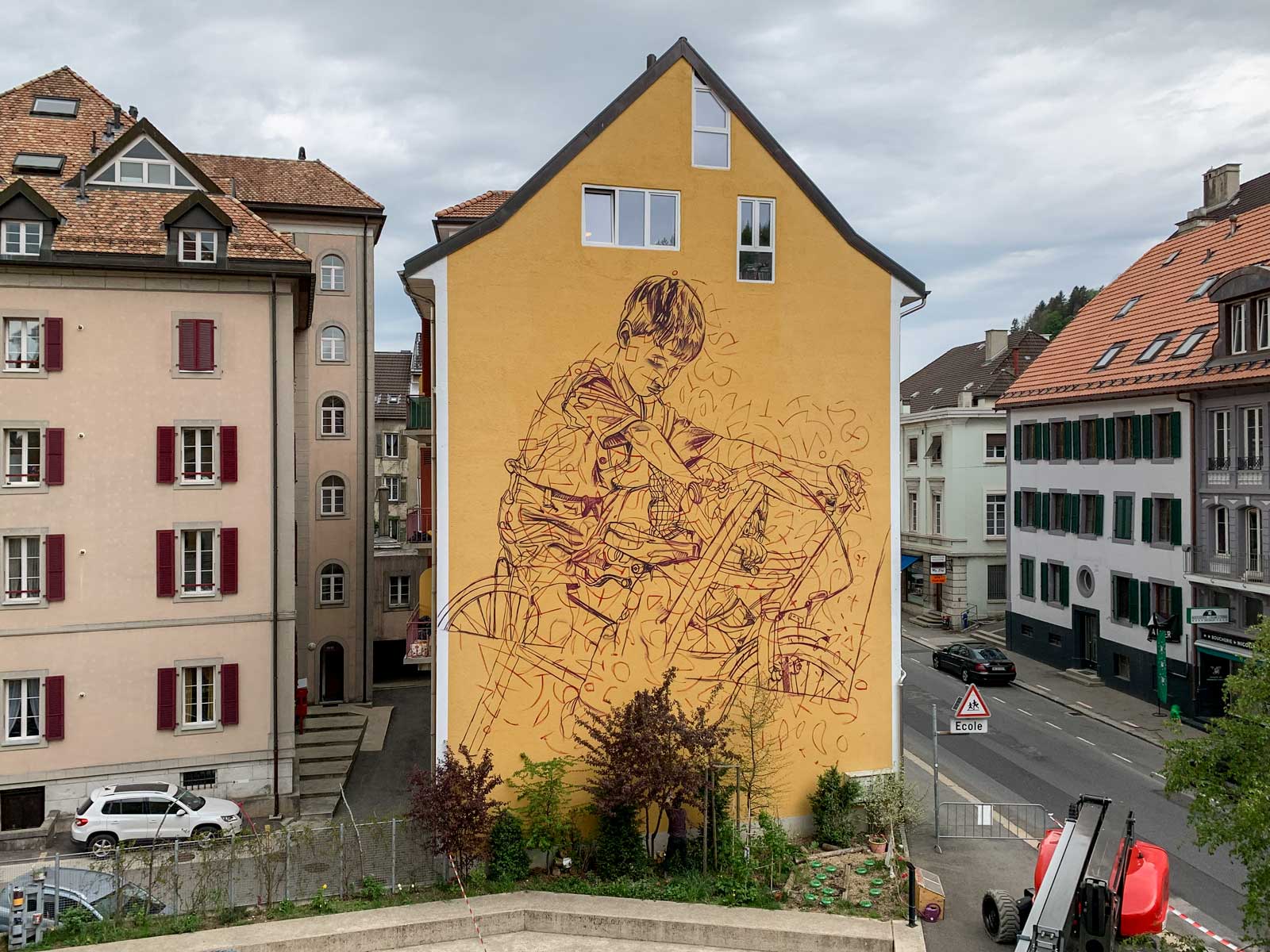 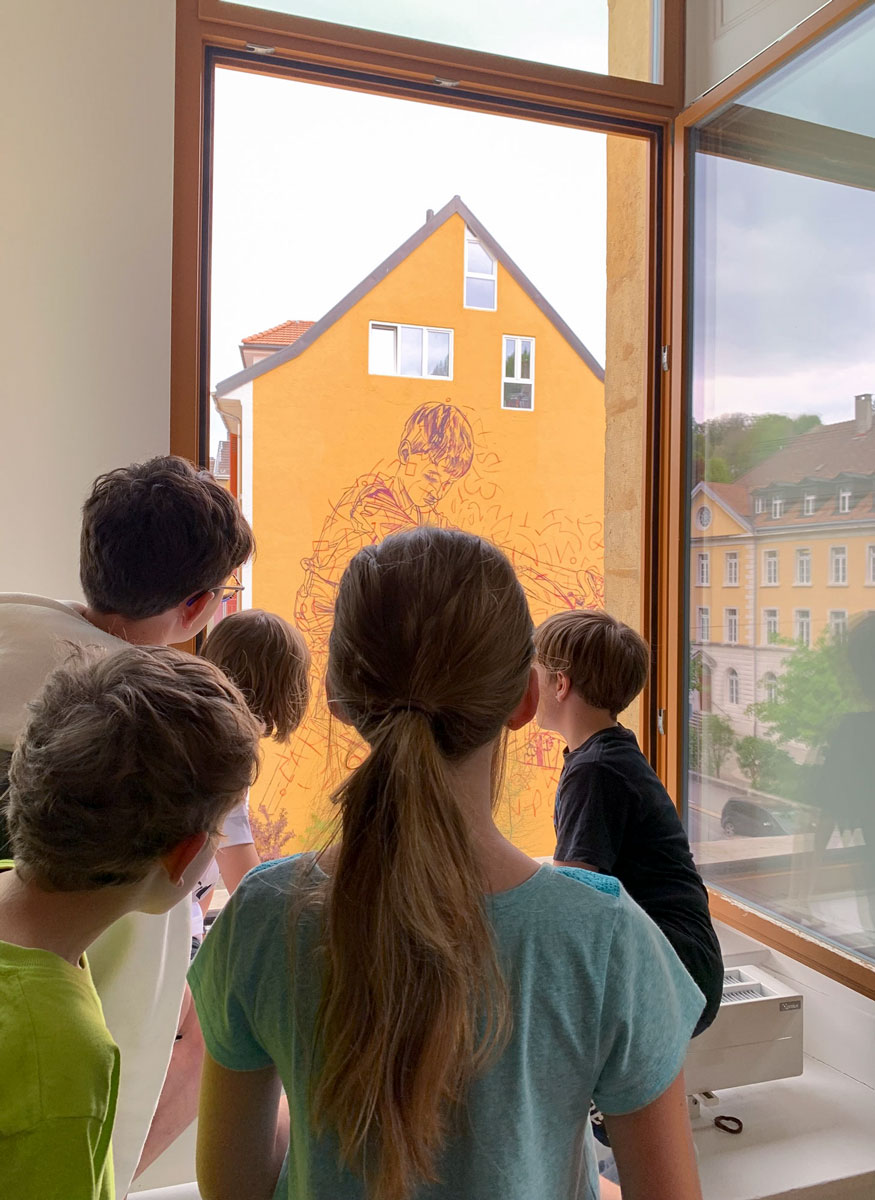 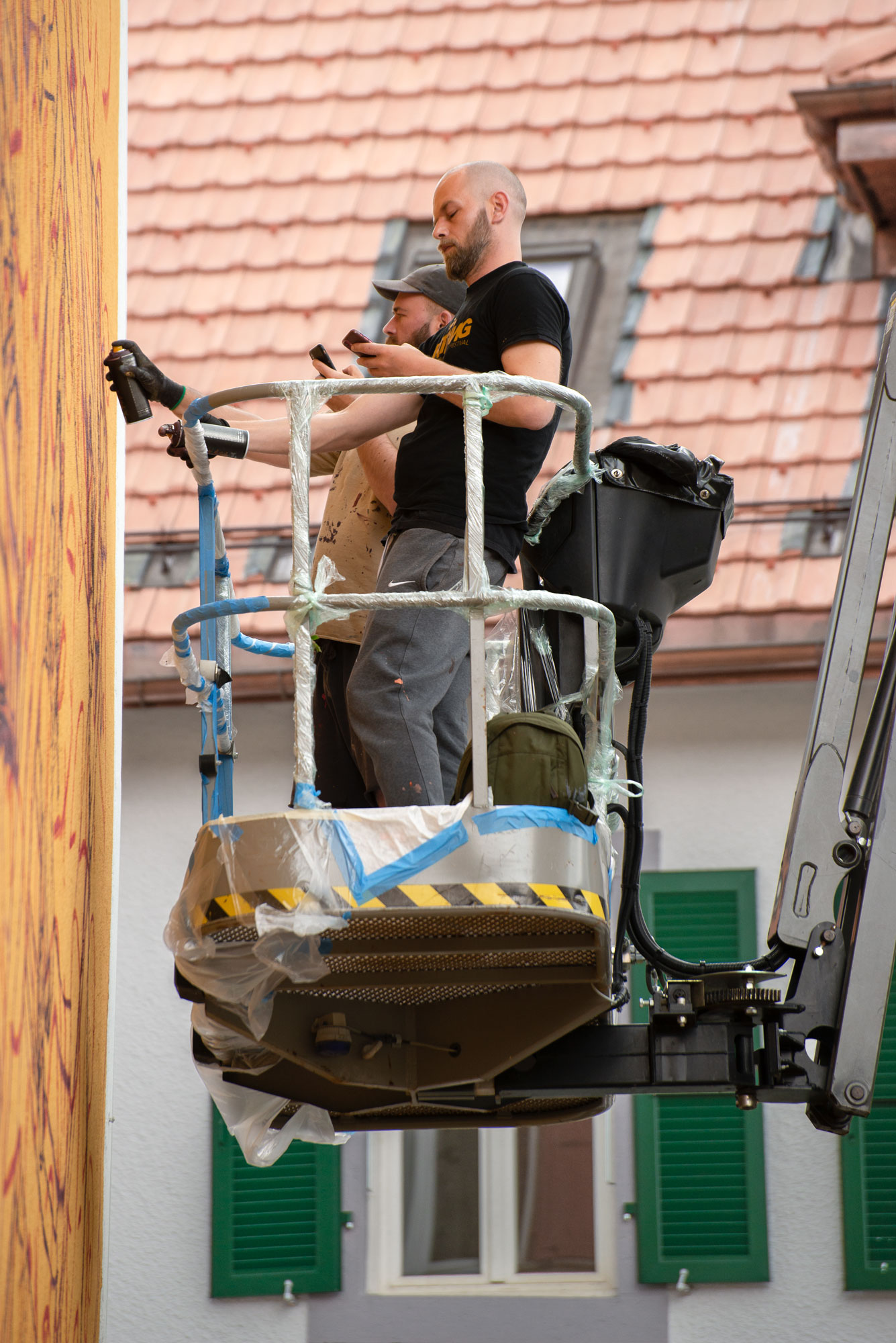 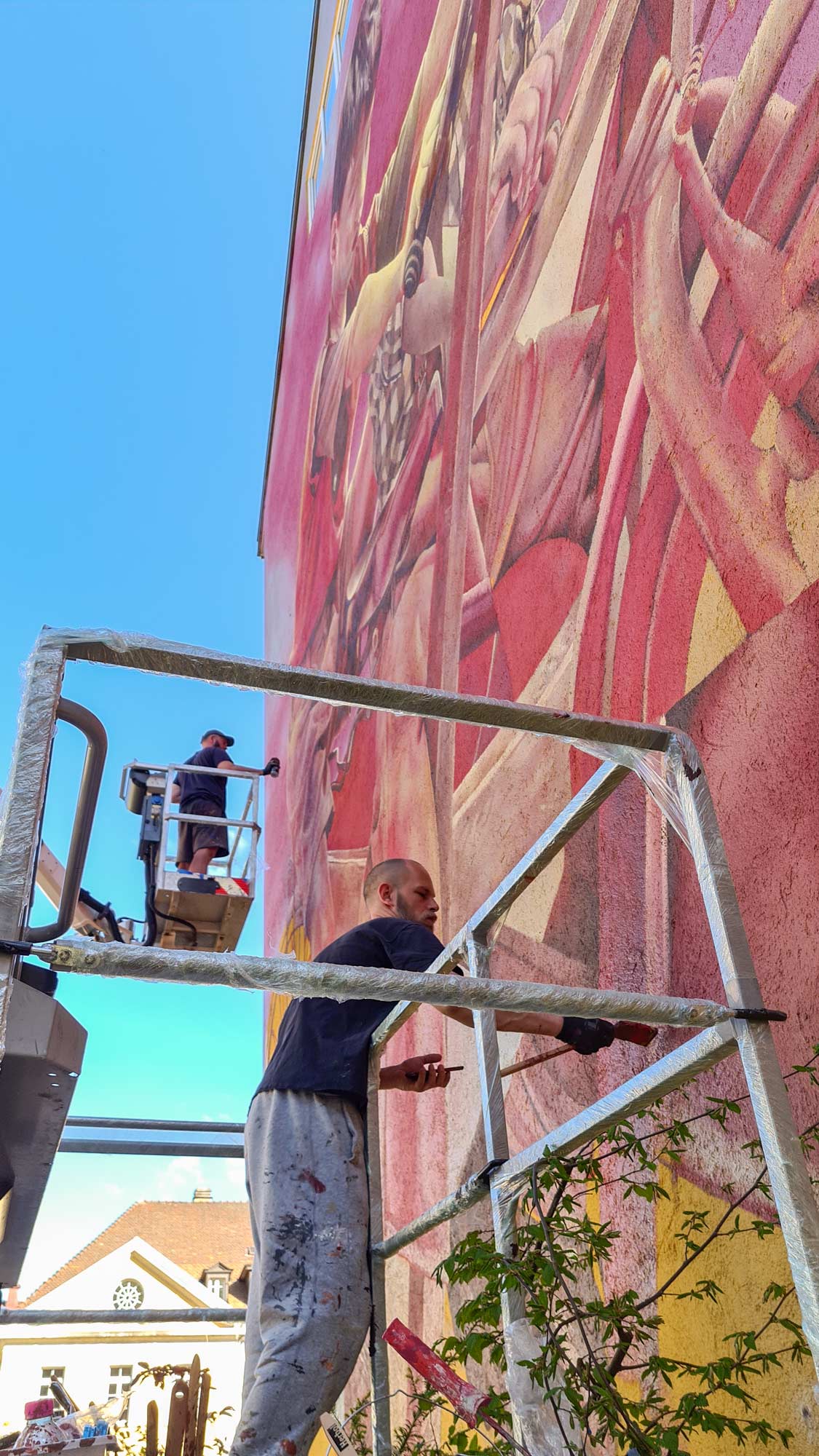 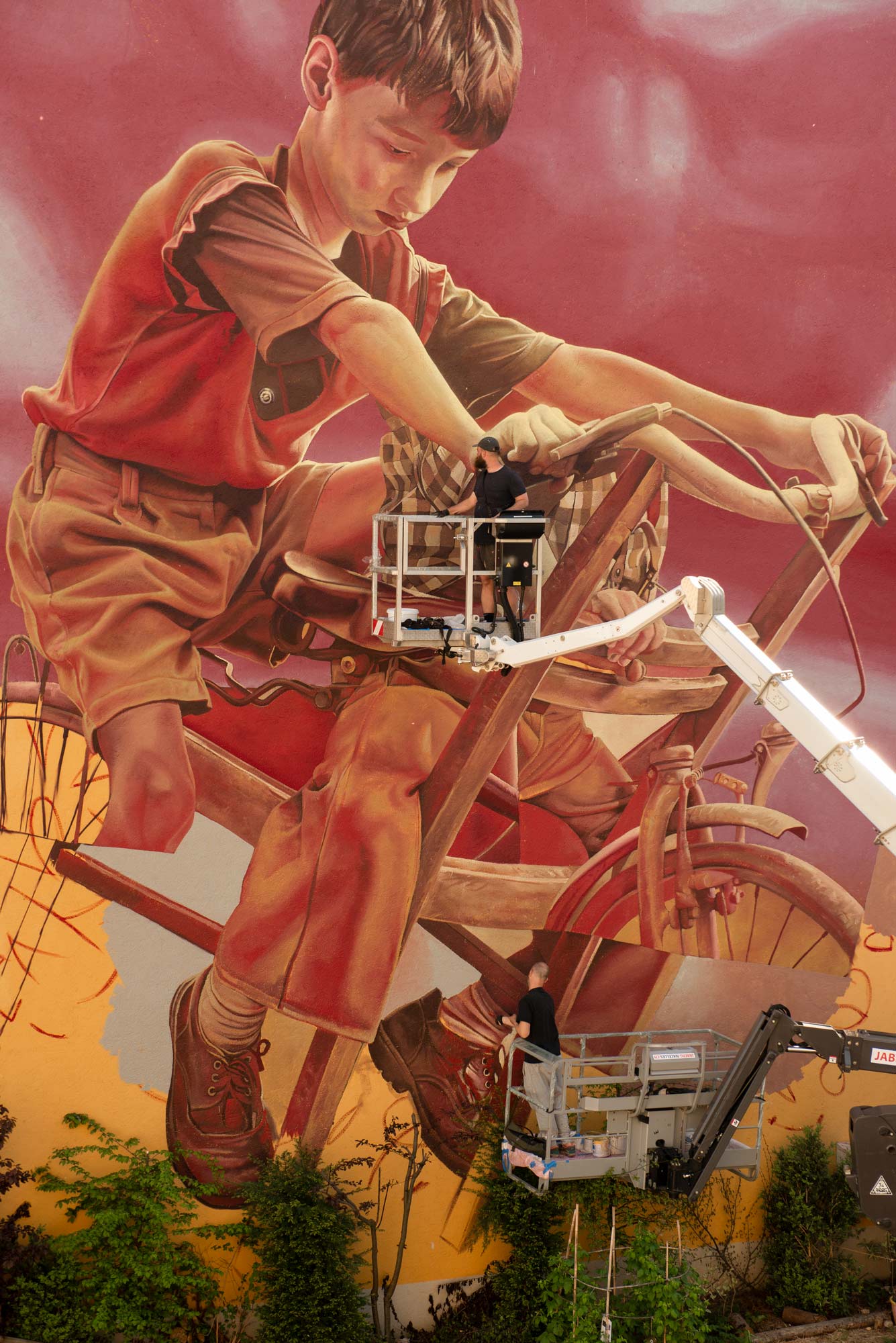 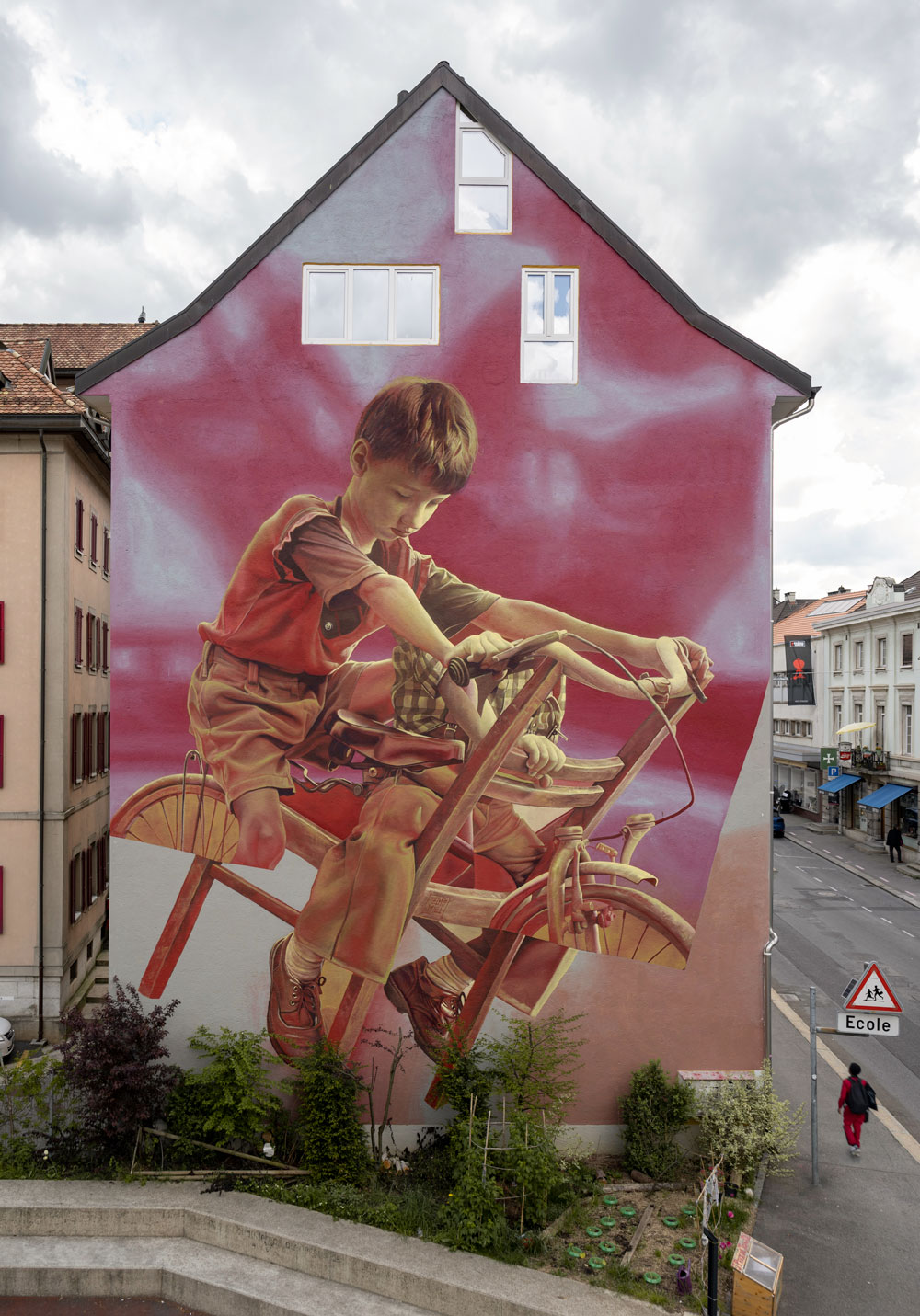 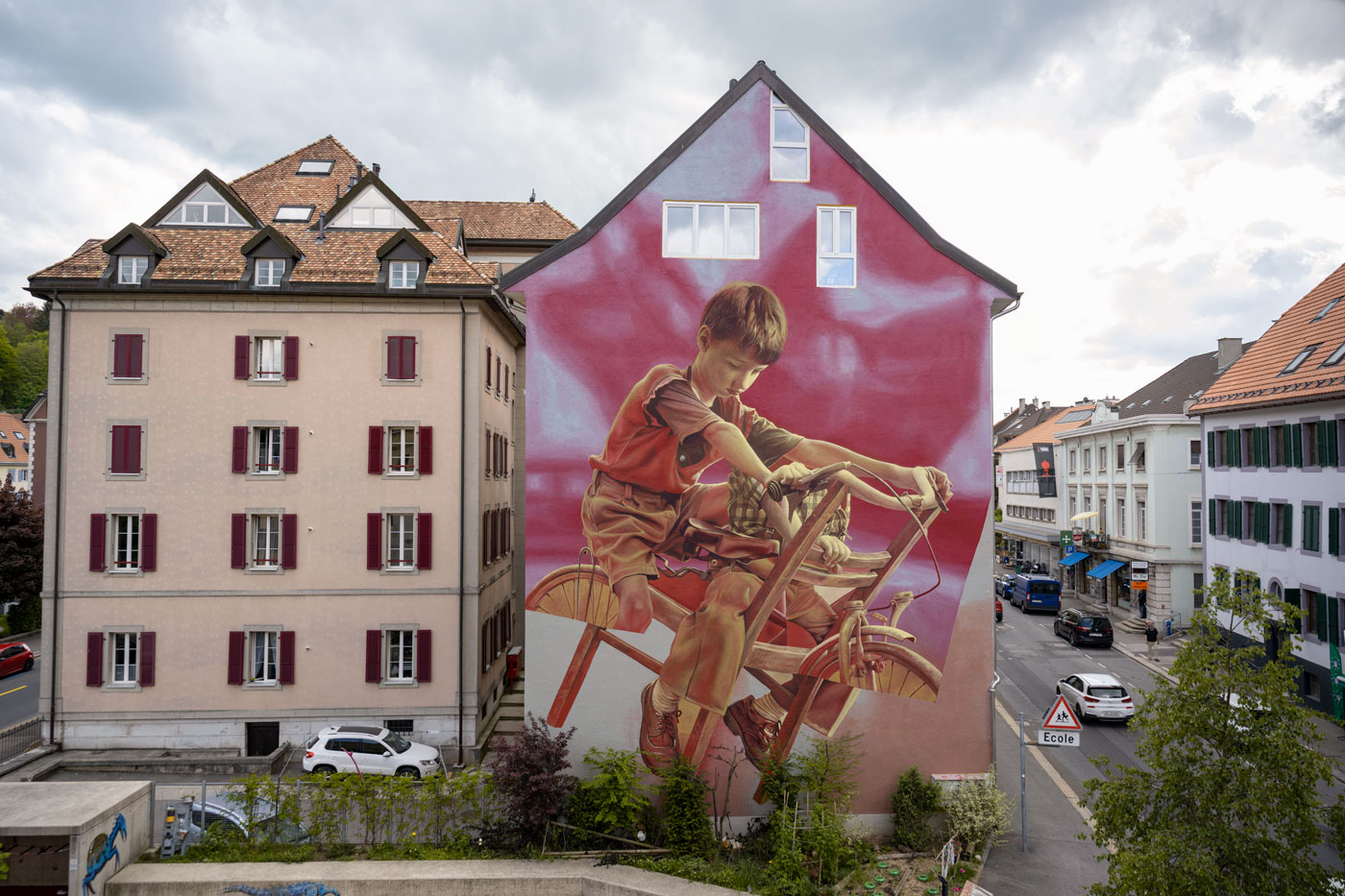 In May 2022, the Dutch duo TELMO MIEL painted a fresco in one of Le Locle’s busiest streets in homage to the benefactress Marie-Anne Calame, founder of the Établissement de travail des Billodes, now located at route des Monts 24 and renamed the Centre pédagogique des Billodes. A native of Le Locle, Marie-Anne Calame (1775 – 1834) was one of those exceptional women who strove to make the world less unfair, by showing authority and entrepreneurial spirit at a time when patriarchy confined women to subordinate roles.

If Marie-Anne Calame were to come back to life, almost two centuries after her death, she would certainly be surprised and flattered to discover, in a street of Le Locle, that bears her name, a fresco painted in her honour by two of the continent’s most talented neomuralists. Having dedicated her life to others, there is no doubt that she would have welcomed the artists’ choice to depict an underprivileged child at play, rather than her portrait.

To emphasise the importance of imagination, one of the only riches of children living in precarious conditions, Telmo and Miel painted a boy who imagines himself on a bicycle, while sitting astride a chair. This fresco is therefore an assembly of two images between which the eye moves back and forth, in search of reference points. When a child caresses a dream, his imagination often overrides reality. This is why the ‘imaginary’ cyclist takes up more space in the composition than the body of the seated boy. The latter has a truncated chest, because he has « his head elsewhere », as the saying goes. His sulky expression reflects his frustration at having no choice but to play with bits of strings.

Once a child is able to stand on his or her own two feet, the bicycle becomes a fabulous vehicle for discovering the environment, refining the sense of balance, experiencing the feeling of speed and its downsides, i.e. unsightly scabs on the knees. Like few other toys, the bicycle symbolises escape, a first form of independence, as well as the need to evolve and move forward.

At the beginning of the 19th century, in Le Locle as elsewhere, children and teenagers were not spared precariousness. When you have no choice but to dress in second-hand clothes, how can you not envy the wealthy who have a wardrobe for each season and clothes for their leisure time? The boy sitting in the chair is wearing a coarse checked shirt and trousers that are too ample for him, held up by suspenders, an adult’s ‘trousers’, shortened, and in danger of getting caught in the spokes or the chain of the bicycle. In imagining that he owns a brand new bicycle, the boy dreams of the clothes that go with it: shorts and a short-sleeved jersey, topped off with a flashy red waistcoat. The right outfit to shine in the neighbourhood! Because more than just owning a bike, this poor kid dreams of reaching a higher social level.

Stylistically, this fresco is part of a continuity. Since 2012, Telmo and Miel have developed a metaphorical pictural vocabulary that has gradually moved away from photorealism, a style that fascinated them more when they were teenagers. While the contribution of photography is still useful to them to achieve a level of striking realism, the duo increasingly prefers to integrate clearly pictorial areas into their work and tends to give more room to abstraction. With the help of computer programs, they like to cut up, fragment, manipulate the photos that constitute their creative material. Like the fresco they created in Le Locle, their paintings often combine several images, skilfully interwoven. Thanks to this kind of spatial division, the artists simultaneously represent several aspects of reality, several possibilities. By multiplying the angles of vision, they induce a narrative process, a bit like a minimalist animation, consisting of only two images, suspended in time.

Custom-designed for this 184 m2 façade, this fresco was painted in only six days, mostly with brush, before being finished with spray in some places to smooth out certain gradations and accentuate the contrast and spatiality of the fresco. Having tackled walls up to five times larger than this one, the duo confesses that gigantism is nevertheless not their cup of tea. « The size of this wall is ideal. When a fresco is more than twenty metres high, you can no longer distinguish the brushstrokes, the pictorial grain », explain the artists.

Under the leadership of her father, a bourgeoise master, clockmaker and master engraver, she took up ivory engraving and learned enamel painting, a delicate craft which became her profession. Generous and sociable, she naturally felt the need to pass on her passion for art by giving drawing lessons.

Educated according to the principles of Christian charity, far from wallowing in her privileged status, Marie-Anne Calame was deeply concerned about the fate of disadvantaged children. In 1815, with the help of a handful of friends, she raised funds to place poor girls in « good families » in Le Locle, so that they could learn a trade that would allow them to earn an honest living. A year later, she decided that it was finally more judicious to bring these children and teenagers together under one roof and therefore she rented half a house in the Billodes district. The Billodes Institution for Work was born. There, the children were taught writing, reading, natural history, drawing and lacemaking. The institution’s financial resources were meagre, coming mainly from donations, and the 1816 food shortage almost put an end to this noble enterprise. As she saw her friends, discouraged, leave the ship under the pretext that money was cruelly lacking, Marie-Anne Calame persisted and managed to raise the funds necessary to run her institution. From 1820, thanks to the generosity of a committee of philanthropists, the institution was able to open its doors to the boys, who were housed in an adjoining building. Over the years, the institution grew. In 1830, it consisted of three buildings.

In 1834, Marie-Anne Calame took her last breath. As a farsighted woman, feeling her strength dwindle, she had taken care to designate her successors, so that her institution would survive her.

In 1842, the oldest building of the institution was demolished, making way for a vegetable garden. In 1901, following a fire that partially destroyed the main building, without causing any casualties, a new dwelling was built. In 1971, the school was renamed « Centre pédagogique des Billodes » and took up residence in the Monts area.

During her life, Marie-Anne Calame refused a dozen marriage proposals and had no children. The celibacy was for her synonymous with independence, the guarantee of being able to carry out her project of a charitable institution. Her middle-class origins certainly contributed to the fact that she had great self-confidence, aplomb and a scathing sense of repartee.

In 2015, the Col-de-Roches Underground Mill Museum organised an exhibition in her memory. If you would like to know more about the history of this benefactress, here are the books about her: 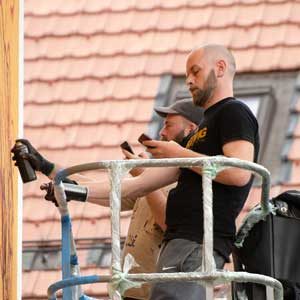