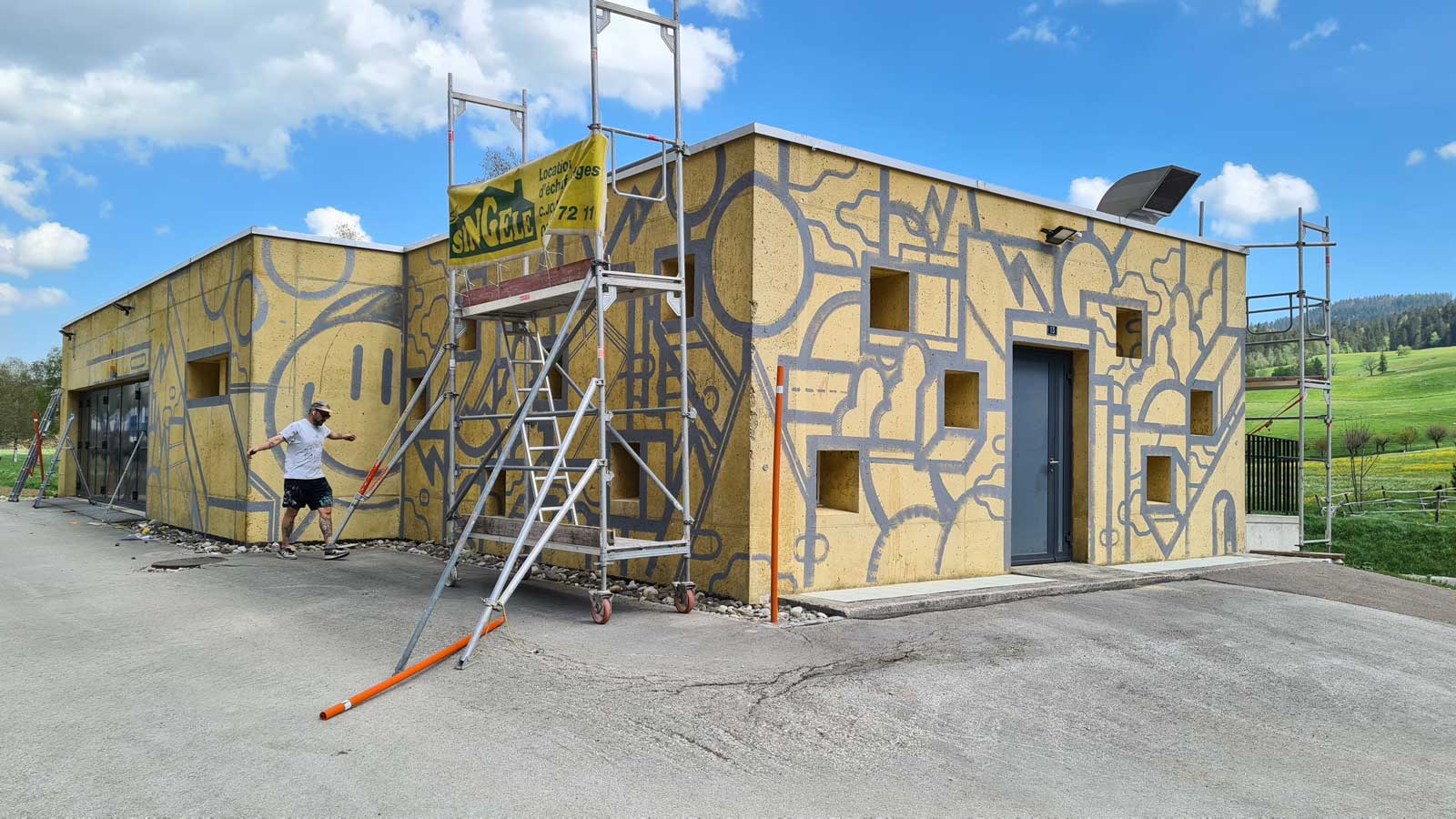 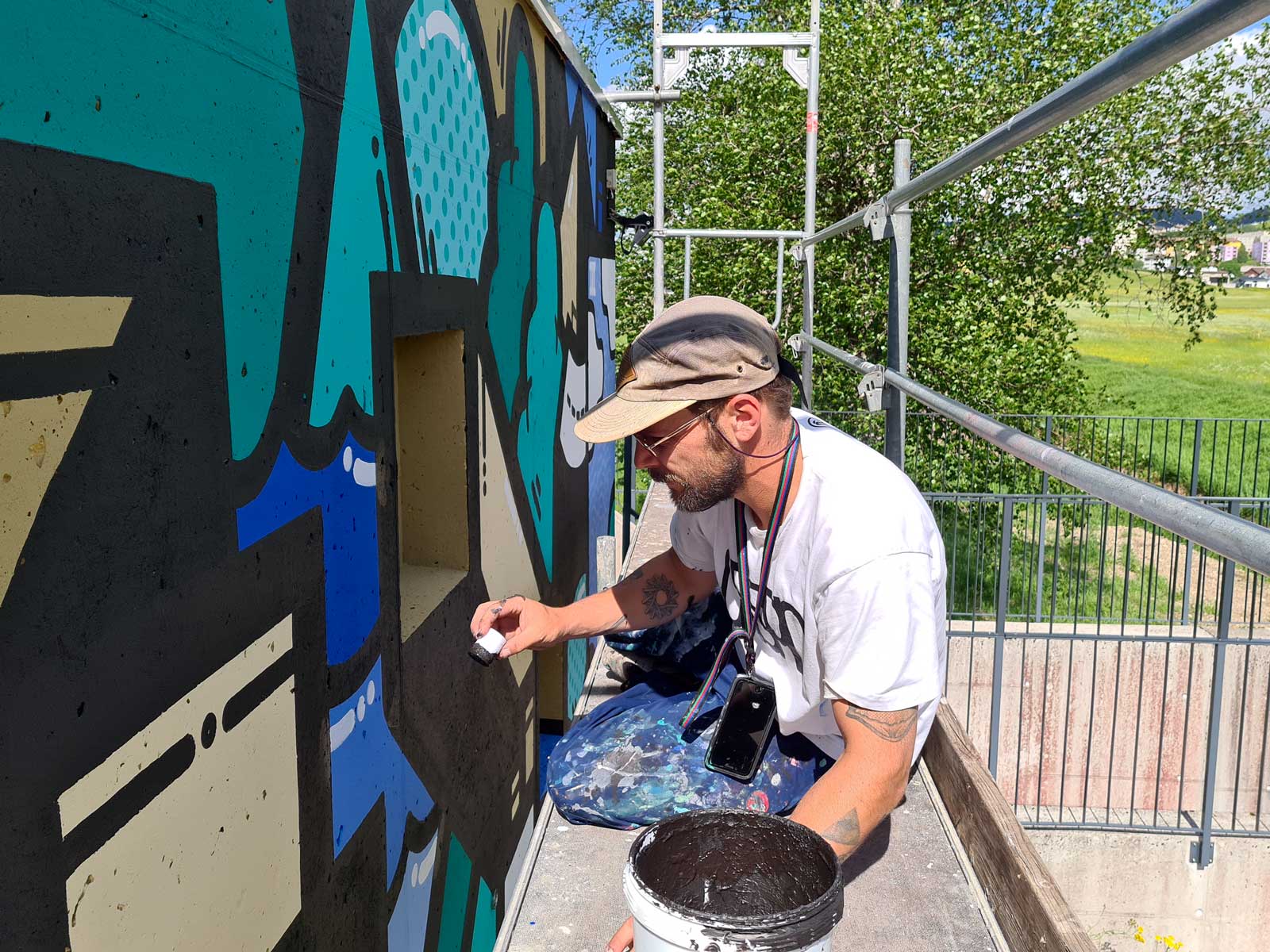 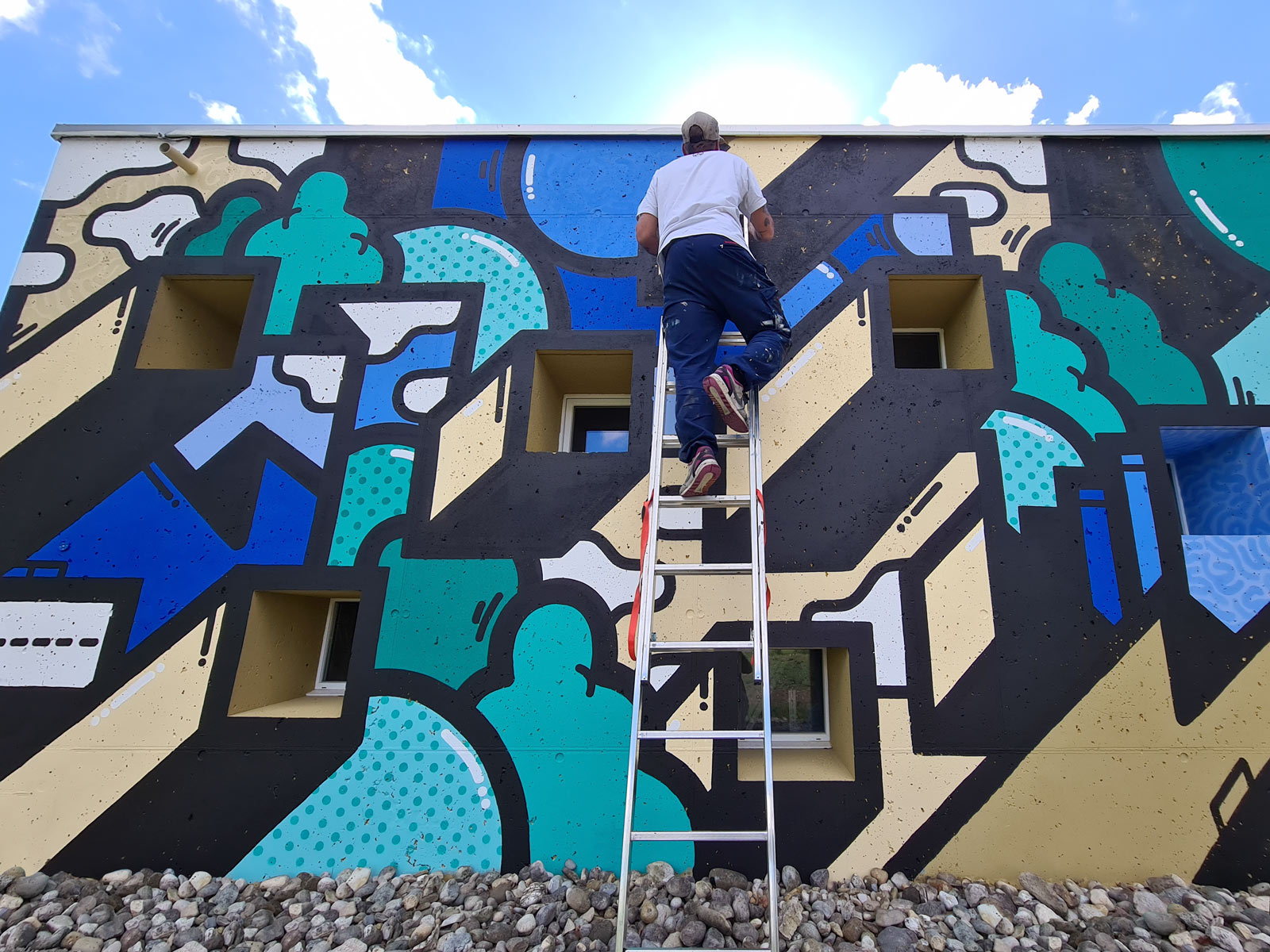 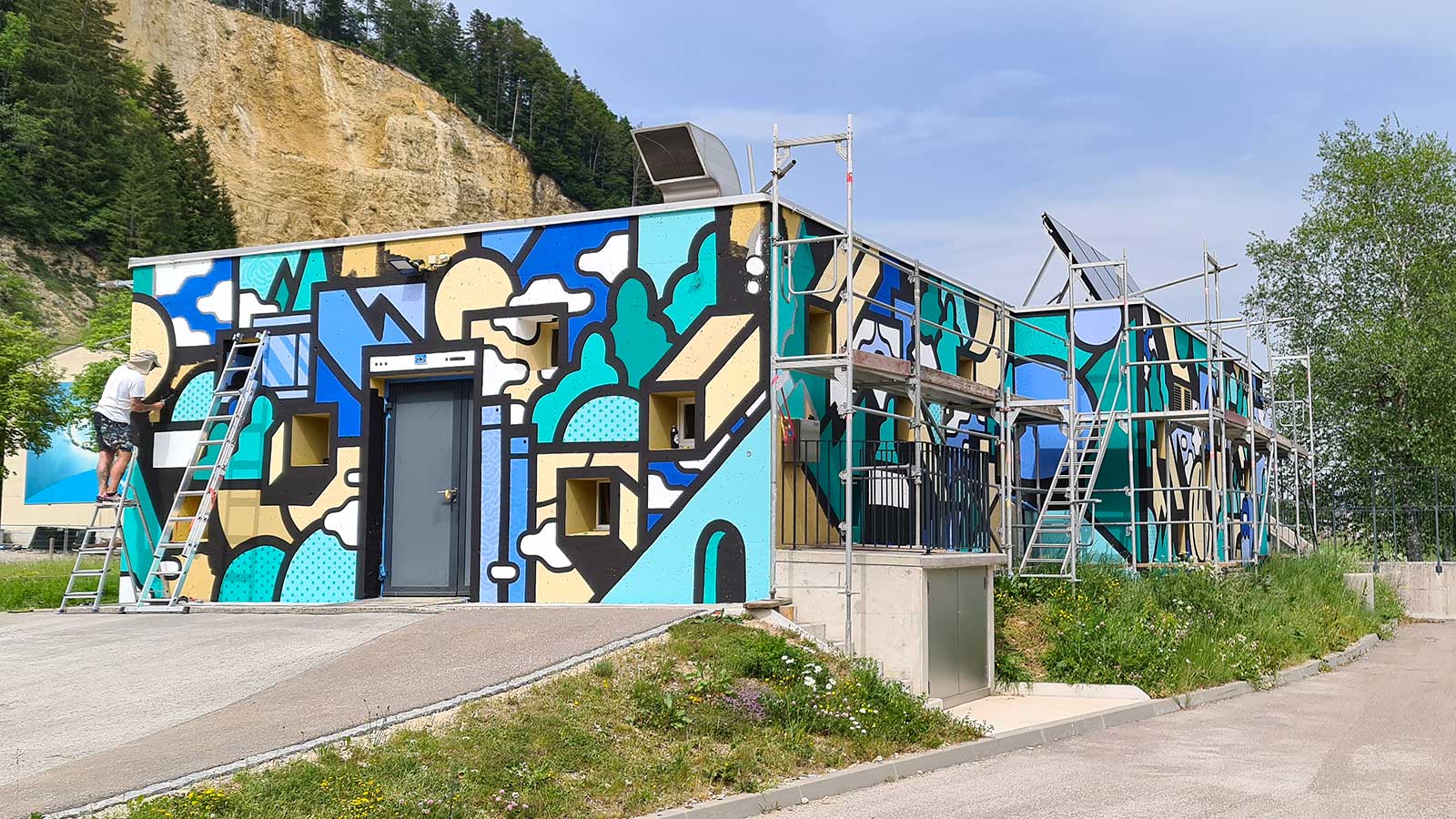 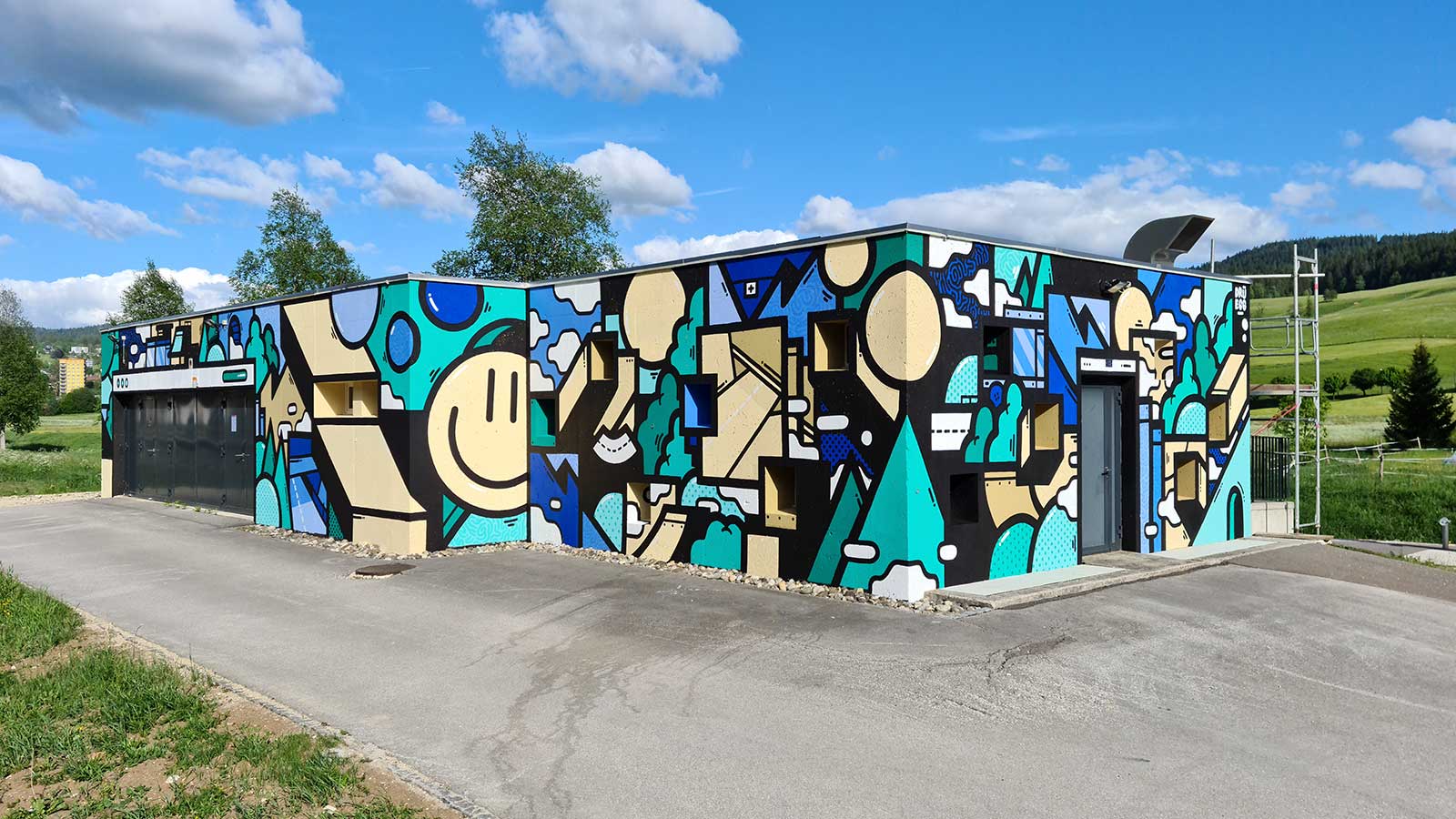 At sunset, Le Locle unravels into the plain of the Col-des-Roches. Discreetly, between groves and

imposing factories, the river Bied emerges from the bowels of the Mother Commune, from the rectangular mouth of an underground which resembles a flooded tunnel. Before the beginning of the 19th century, when it was canalized, this watercourse regularly flooded the valley floor during snowmelt and long periods of rain.

On its right bank, at the end of the long trench which serves as its bed, its waters are cleaned by the technical installations of Actiflo, during heavy storms, to relieve the purification plant located downstream.

On its left bank is a vast meadow dotted with flowers, a sanctuary for a multitude of insects. It is in this rural setting that the rubble from the drilling of the Le Locle bypass tunnel will be piled up. This bypass tunnel, a road structure meant to relieve, by 2030, the city’s arteries, which are congested daily by commuter traffic.

Located next to the railway line and the road leading to the Franco-Swiss border, a stone’s throw from the future tunnels and the lake to be built, Actiflo is ideally placed to host a fresco on its walls picturing the transformation of the landscape by humans. With this in mind, the Exomuseum invited Drü Egg, a street artist from St. Gallen, who creates graphic compositions that combine architectural and organic symbols.

Drü Egg believes that the quest for harmony between nature and human achievements should be at the centre of any architectural project. On the scale of Le Locle, the advent of a bypass tunnel is synonymous with less pollution in the city centre. « People will have waited so long to use this tunnel that they will all have a smile on their faces when they come out of it », says the artist, explaining his choice to include two smiley faces in his fresco, before adding, « For foreigners arriving in Switzerland via the Col-de-Roches, these pictograms will be perceived as signs of hospitality and joviality ».

Created with roller and brush, this fresco is representative of Drü Egg’s « doodle art » style. A « doodle » is a drawing made up of random patterns, drawn in such a way as to form a hypnotic mesh of figurative or abstract forms.

Drü Egg strives to create pictograms that are simplified to the extreme, sometimes bordering on abstraction. His approach is not very far from that of Keith Haring or Mr Doodle.

Instinctively, the eye identifies roads, bridges, tunnel entrances and exits, further on a bus and a train, a waterfall, mountains, fir trees and clouds. Graphically, the artist has had fun accentuating or erasing

the building’s planes and rhythms. By visually extruding the square windows, according to a cavalier perspective, Drü Egg illustrates the pilotis that support the city centre of Le Locle. To evoke the windows of the operating system developed by the company Apple, the artist has painted bars above the building’s doors containing the three buttons used to maximize, reduce or close the windows. « In certain forms, the rasters made up by dotted lines are reminiscent of certain printing processes. Those in the blue surfaces evoke aquatic eddies, something organic, » explains the artist.

Considering that the Actiflo looks like a bunker, Drü Egg preferred to use turquoise paint rather than green, green being a more natural but more « military » colour, especially when combined with beige shades.

In the 2030s, when this tunnel is finally operational, the frenetic dance of the excavators and concrete mixers

will not stop. After the mountains have been cut through, the plain will be dug up to create an artificial lake in order to regulate the waters of the Bied and « compensate » for the damage to biodiversity caused by these titanic worksites. Before bathing in Lake Le Locle and enjoying a plain free of traffic jams and the noise of machinery, the people of Locle will have to wait and put up with a long period of entropy. 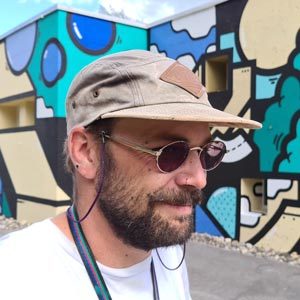